You are here: Home>Places>Houses>Doubleton>Growing up at Doubleton

Growing up at Doubleton

Growing up at Doubleton Jan 2017 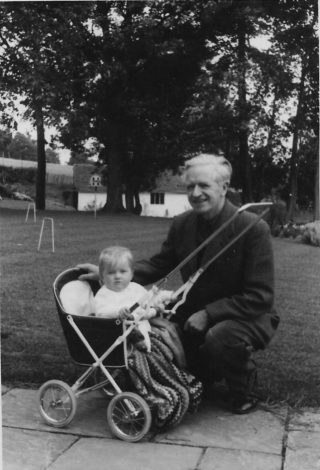 Louise with her father at Doubleton 1950s

Growing up in Penshurst

I was born at Doubleton Farmhouse, at the far end of Doubleton Lane in the mid fifties. My parents bought the house in 1954, and moved there with my two older sisters Joanna and Tessa, dogs and ponies.

My father used to drive up the farm track (which runs between the cottage and the farmhouse) to Beggars Barn on his way to Hildenborough Station in the mornings. (This track is not a right of way and is now impassable to vehicles having been sold to the adjoining properties). My parents were able to buy Doubleton Cottage, next door, and to convert the two farm cottages into one. They also bought the oast, then a tumble-down farm building, and converted it into a house. After my father  died, we moved to Doubleton Cottage, then a year later to the Oasthouse, when I was 7 years old. Having returned to the cottage in the mid 1980s, my mother finally left Doubleton in the late 1990s, moving to Keymer Court in the High Street.

Childhood memories of Doubleton include pulling straw out of the ‘wattle and daub’ filled walls, open log fires, a huge inglenook fireplace, an attic full of treasures, coal-fuelled aga in the warm kitchen but freezing cold in other parts of the house, especially the bedrooms, and my rocking horse. My father had worked in India as a young man and I remember a tiger-skin rug in his study and a large painting of a ‘wild boar hunt’ with ponies, spears and Indian followers.

I started nursery school at the age of 3 with Hoady (Miss Homewood), a local institution at the Village Hall. We learnt our tables, how to read, write, spell, count, add and subtract, draw, sing and  sew. We all adored Hoady, she was a tiny old lady with long grey hair worn in a bun, very strict but kind and patient too; she caught the bus each day from Somerden, where she shared a house with the artist Marjorie Cox.

We had regular deliveries: newspapers and milk came daily, the bread van arrived from Smarts Hill Bakery 3 times/week, meat from Wells the Butcher in Leigh and even the laundry was delivered weekly in cardboard boxes with a cotton strap. In the village was Mrs Eagleton at the post office in Leicester Square, Buxton House Stores, the Village Store in the High Street, the Westminster Bank, staffed once/week at the Village Hall and then in the ‘Bank Building’ near the Public Conveniences, and Mr Medhurst the Cobbler. And the Church Shop, reached up a treacherous set of steps just beyond the archway off Leicester Square, (famous for Mrs Flower’s rock buns), Fir Tree Tea Rooms (complete with its fir tree), Quaintways and the Forge Garage. And pubs – as well as the Leicester Arms, the Dog and the Bottle House, there was the Blacksmiths, at the top of Grove Road, and the Bridge Tavern at the bottom of Rogues Hill.

Our closest neighbours were the Gall family who moved into Doubleton Cottage in 1964; we subsequently swapped houses, shared ponies, played fast and furious games of Racing Demons and in later years met up in Hong Kong, China, Pakistan, Singapore and Afghanistan. The Bortons moved into Doubleton Farmhouse in the mid sixties; in Doubleton Lane were the Potters, the Taylors, the Taverners, David and Sheila Johnston, Vic and Jean Freeman and Mrs Wagstaff. Sam and Domini Frederick at Beggars Barn had two donkeys, a great attraction.

My best friend for many years was Jackie Watters, Ken’s younger sister. Her parents Jack and Margaret farmed at Well Place and that was my second home! Margaret’s chocolate cake was delicious and her cricket teas (the 3 boys were all keen cricketers) were famous. I remember the milking parlour, harvest time and Jack making beautiful, intricately woven corn dollies for the Harvest Festival.

The winter of 63 was the year all the pipes froze, no vehicle could get up the short steep incline where Doubleton Lane meets the main road, and we were subsequently ‘housebound’ for what seemed forever!! In September 1968 the River Eden flooded well beyond the River Meadows, even covering part of the fields immediately below the house, which was the highest point it has reached in my lifetime.

I was given my first pony on Christmas day when I was seven years old. My horizons immediately expanded beyond Doubleton. I explored Beggars Barn Farm, the Coach Road and then the Hever Estate which in those days encompassed Hill Hoath, Chiddingstone, Chiddingstone Hoath, Hever, Howe Green and beyond. I knew all the best places for blackberries and swimming in the river, and used to hack miles to local gymkhanas and Pony Club rallies, held in villages and towns such as Leigh, Hildenborough, Tonbridge, Langton Green, Speldhurst, Withyham, Sevenoaks and Eridge. The nearest farrier was at Cowden and I used to hack there every six weeks for Mr Hadlow to shoe my pony. I remember very early one summer morning riding through the village past the Leicester Arms when a noisy group emerged which included Richard Burton and Elisabeth Taylor who were staying there while Burton was filming “Anne of the Thousand Days’.

I started at Tunbridge Wells Girls’ Grammar on a snowy January day. I caught the morning bus (number 93) with Mary Frederick and Catherine Borton but at lunchtime the school sent us all home as the snow was thickening. The three of us walked home to Penshurst as there were no buses, no mobile phones and no other options!

The 800th anniversary of Penshurst Church was celebrated with the Penshurst Festival in 1970: a pageant, a pilgrimage to Canterbury, feasting and partying; the Twinning of Penshurst and Mont St Aignan, near Rouen, France was initiated by the rector Tony Curry as part of the Festival; this twinning continues today through the Edenbridge (and neighbouring villages)/Mont Saint Aignan  Twinning, with which I am still involved. The Swaylands boys used to walk down the hill to church each Sunday and take up the north side of the aisle. Beating the village bounds became a great annual event. Robert and I were married in Penshurst by Tony Curry; later he baptised our daughter Emma, born in Singapore.

My mother, Lulie Hooper, grew strawberries commercially for many years, first in the field just north of Doubleton, then in the field to the north of the Oasthouse. This was hard work and the strawberry beds  required rotovating, tending and regular weeding, as well as the seasonal picking, packing and delivering. In later years she was a pioneer as one of the first English growers of ‘fraises du bois’ or Alpine strawberries which were tiny and fiddly to pick but sold for a fortune at top London restaurants and Covent Garden fruit and vegetable market. She also grew globe artichokes and courgettes, both something of a rarity in English kitchens and restaurants in the 1960s and 70s. Once she grew Christmas trees: the whole field was harvested in December, waiting for collection, but stolen overnight! Not a venture she repeated.

When my mother had early morning starts for Covent Garden, where she sometimes went 3 times a week in the strawberry season, I found it hard to wake up and get myself off to school. Mr French who delivered the newspaper used to hoot outside my bedroom window until I dragged myself out of bed and assured him I was awake.

We had a traditional ‘Romany’ gipsy caravan in our garden which we used as a spare room. Laurence Lee, the stained glass artist who lived on Smarts Hill and designed and made the wonderful Becket window in the church was a family friend; he often had students working for him and they used to stay in our caravan.

I remember hop picking at Elliots Farm for Murray and Helen Mackenzie during the 1970s. The hop gardens were below Swaylands and above the river, quite steep sloping. There were early morning starts, the hops were full of dew and we used to get soaked! I was a tractor driver, a great and relatively dry job. There was a strict order and allocation of duties: first went the ‘hop-bine cutter’, on foot with a sharp knife, cutting both bines either side of the row, so that they hung down like a pair of soaking wet green curtains. Next came the tractor and trailer, following at walking pace, the driver getting soaked by the trailing bines. On the trailer stood two ‘hop-bine grabbers’ whose job was to grasp the end of the (soaking wet) dangling bines and hook them to the front of the trailer. Close behind the trailer was a second tractor with a ‘crow’s nest’ suspended over the trailer in which stood another ‘hop-bine cutter’ who’s task was to cut the top of each bine as it was hooked onto the front of the trailer. Each task was vital and interdependent, if any bine was missed, the procession was halted until all was in order. As soon as the trailer was fully loaded, it was driven back to the farm barns where the bines were individually loaded into a conveyor by the tractor driver, to be stripped and dried. The tractor driver then sped back to the hop gardens and loaded up again. The tractors didn’t have the best of brakes! When picking a row facing downhill, Murray’s instructions were to put the tractor in reverse, then gently shift the clutch to allow slow forward movement. To stop you simply held the tractor on the clutch!

Later jobs included waitressing at the Spotted Dog with Des and Nora Leppard, teaching at Hoady’s, working pupil and groom for Sarah Whitmore (Olympic 3 day eventer and dressage rider) in Edenbridge and gardener at Hever Castle. I then studied landscape architecture in Edinburgh; after working in Scotland, Hong Kong and Singapore, spending over twenty years away from the village, I returned to Penshurst with my family (Robert, Emma and Tom) in 1998 and now have my own landscape practice based here in Penshurst. 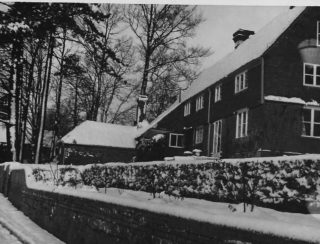 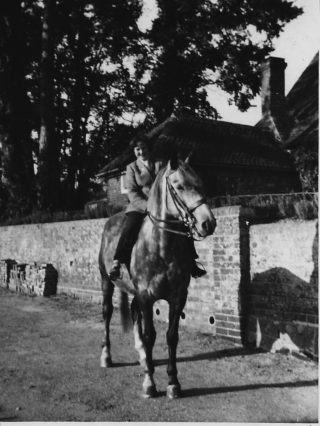 Tessa with Crusader at Doubleton 1950s 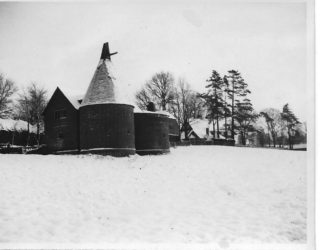 Doubleton Oast in the snow, before renovation, 1950s 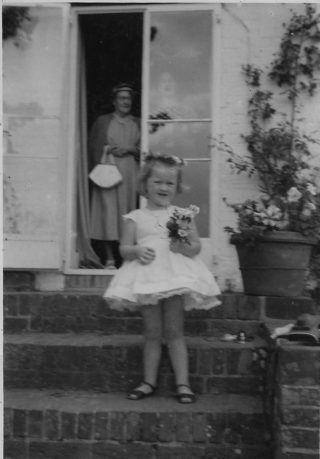 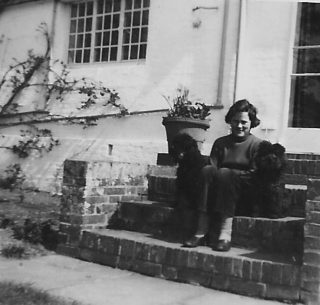 Tessa with Max and Pepsi at Doubleton 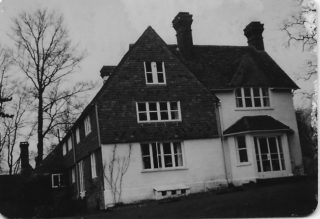 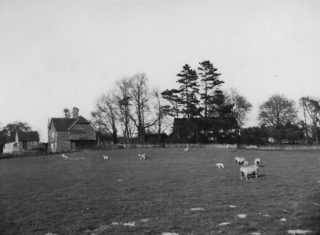